What is an exosome and why does it matter for glaucoma treatment?

In August this year, our new £100,000 PhD grant was awarded to Dr Ben Mead, a lecturer and researcher at Cardiff University’s School of Optometry and Vision Sciences. Ben will use the grant to recruit a PhD student to research exosomes as a therapy for glaucoma. 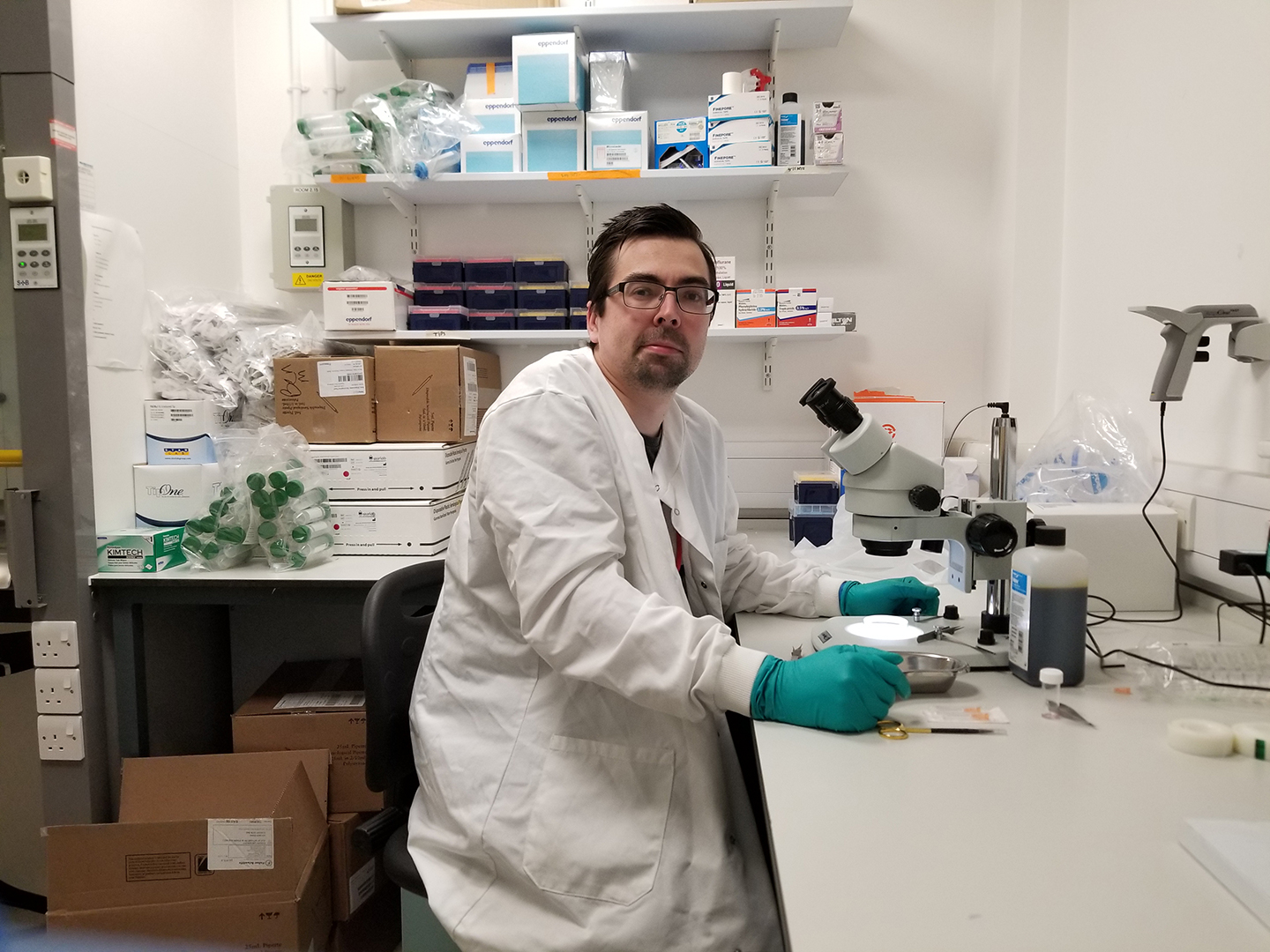 Ben’s PhD project developed out of his previous research which showed that by transplanting adult stem cells from bone marrow into the eye, the death of retinal ganglion cells (RGCs) can be prevented.

Why are RGCs important?

The back of the eye is lined with a light-sensitive layer called the retina. Images on the retina are converted into electrical impulses by nerve cells. These impulses pass along nerve fibres in the optic nerve to the back of the brain, where the image is processed and understood.

RGCs are particularly important in this process because they’re a major part of the optic nerve, and when they die it leads to permanent sight loss.

I can get the same therapeutic effects the stem cells gave us – i.e. stopping the death of RGCs – but without having to perform a cell transplantation

Ben explained, “The transplanted stem cells act as a sort of mini-factory, secreting something called exosomes which act as neuroprotective agents. Exosomes are tiny membranous ‘packages’ just 100 nanometres in diameter, and inside they contain proteins and RNA.

“By isolating these packages, I can get the same therapeutic effects the stem cells gave us – i.e. stopping the death of RGCs – but without having to perform a cell transplantation.” This is not only a safer approach but is also more effective because higher doses can be used.

So where do researchers get the exosomes from?

“Basically, every cell in your body releases exosomes” explained Ben. “People think of these small packages as the cell’s rubbish removal system, releasing all the waste material from a cell, but they’re also like a reflection of the cell itself. So a cancerous cell will release exosomes that signal to other cells to become cancerous.

“But if you have pro-regenerative cells like the ones I was using as treatment, then their exosomes will be therapeutic. So you take these therapeutic stem cells, simply put them in a dish and they’ll shed exosomes, release them into the cell medium, we collect that medium, spin it down in the lab, and that’s it. We can collect as many as we need and simply inject them as we want to.”

How will Ben’s new PhD student fit in?

Ben’s previous research has shown that not all stem cells are the same. “Those that come from dental pulp, bone marrow and adipose tissue are all unique and they have different effects after they’re transplanted. We want to see if the same is true for the exosomes they secrete. So, we’ll isolate exosomes from many different stem cell types and we’ll compare their clinical efficacy. The goal is to ensure that the most effective formulation is taken forward for clinical testing.”

The PhD student will use data gathered by Ben in his previous work. “We’ve got a lot of really good data already, so this student isn’t going on a fishing expedition or trying to discover things, the main discovery has pretty much already been done. It’s now about optimisation; choosing the right treatment from the right cell type. So it’s not a question of whether it’s going to work  – we know it is – it’s more a case of which works best and which we push towards the clinics.”

A number of pharmaceutical companies are interested in Ben’s work, and several have asked if they can collaborate. “I’m very hopeful that within a few years we’ll have something we can take to those pharma companies and say that we’re ready to go to the next phase.”

Ben sees the most likely application to be via eye injections that stop the progression of glaucoma, similar to current treatment for age related macular degeneration. “The challenge will be to get longevity in treatment. Eventually, a twice-yearly treatment would be great but having a formulation perfected is the aim: to be able to say we’re going to use these exosomes, from this cell type, in this amount, injected this often, and it will last this long – that’s the goal.”

Ben has obvious passion for his work, and we asked him where that came from. “I did my PhD in a neuroscience lab, and from the start, glaucoma captured my attention more than any other field. I found that all the treatments I was looking at – stem cell therapies – just worked better in glaucoma than in other conditions. For the last five to 10 years, it’s always been glaucoma for me. I also have a family history as my gran had glaucoma, so maybe it’s self-preservation too!”

Why your support matters

We are all very aware that this £100,000 grant is only happening because of the kindness and generosity of our supporters and donors. This kind of dedicated research just doesn’t happen without you.

The idea of just working on glaucoma is really hard to get funding for.

Ben told us, “With this kind of grant, you’re funding the career of an up and coming researcher, someone who’s done a degree and who’s interested in research but who doesn’t have the money to take that final step to do the PhD and become a qualified scholar. We’re creating another researcher who will be glaucoma-specialised. They’ll know these models, and that’s really important.

“The current funding climate is challenging. If you want to get a government-funded grant you can’t say that you’re working on glaucoma. You have to say that you’re working on central nervous system disease that has applications in glaucoma, optic nerve injury, spinal cord injury, traumatic brain injury, etc. Then maybe you can capture everyone’s interest and get funded. But the idea of just working on glaucoma is really hard to get funding for. Glaucoma UK focuses on a specific disease, really unravels it and focuses on very specific treatments; that’s where you shine, that has impact.”

You can help make a difference to the way glaucoma is treated and support sight-saving research like Ben’s by donating to Glaucoma UK.