Secondary glaucoma is the name used to describe glaucomas that occur as a side effect or “secondary” to another underlying medical condition or trauma. This differs from primary glaucoma, where there’s no identifiable cause for the glaucoma to develop. Even though the cause of primary and secondary glaucomas may be different, the increase in eye pressure and the resulting damage to the optic nerve are the same.

The structure of the eye 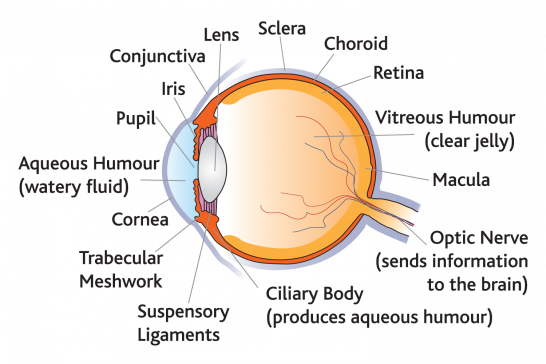 To understand secondary glaucoma it’s useful to understand the structure of the eye and how fluid drainage works.

Your eye pressure is controlled by watery fluid called aqueous humour, or just ‘aqueous’. Aqueous is made in a ring of tissue that sits behind the iris called the ciliary body. It then flows through the pupil and drains away through tiny channels called the trabecular meshwork. The trabecular meshwork is found in the angle between the cornea and the iris (often called the drainage angle). In a normal eye, there is a balance between inflow and outflow of fluid, but in some eyes this balance is disturbed, and this causes the eye pressure to rise.

In secondary glaucoma, these issues arise due to a problem with the drainage system so fluid outflow doesn’t work as well as it should. The eye can’t get rid of the fluid fast enough and the build-up results in increased eye pressure. The increase in pressure damages the optic nerve by reducing the amount of blood that can get through the tiny blood vessels and by pressing on the nerve itself.

Secondary glaucoma is unlike primary open angle glaucoma, in that when the underlying problem that caused the raised pressure is corrected or cured, the pressure may return to normal. Unfortunately, if the increased eye pressure has already caused damaged to the optic nerve, any resulting sight loss is permanent and irreversible.

Further details about all the secondary glaucomas listed above can be found in our booklet ‘Secondary Glaucomas’. 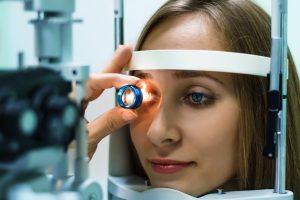 Iatrogenic literally means ‘caused by a doctor’ and unfortunately this is one of the most common reasons people experience secondary rises in eye pressure. The main iatrogenic cause is following retinal surgery. During retinal surgery, the surgeon may need to put gas or silicone oil in the eye. These substances can have the side effect of raising the eye pressure.

Another common iatrogenic cause of high pressure is the use of steroids and other medications. This is covered in more detail below.

Lens-related issues, like cataracts, can also cause a secondary rise in eye pressure. An advanced cataract can swell up and block the flow of aqueous through the pupil and out of the eye. Removing the cataract relives this.

Medicine-related secondary glaucoma is the result of inflammation caused by medication, typically steroids. Steroids are used for a variety of medical conditions and can be inhaled (inhalers), taken orally as tablets, injected or applied directly to the skin or eye. They are an important type of medicine, but a possible side effect is increased eye pressure. This effect is called ‘steroid response’. This is most common when the steroids are applied locally to the eye, for example when treating uveitis. In most cases of ‘steroid response’, eye pressure will fall back to normal levels when you stop taking the steroids. It is important to have regular eye pressure checks if you are using steroid eye drops for a long time.

Neovascular (“new blood vessels”) glaucoma occurs when poor blood supply within the eye causes new blood vessels to grow on the surface of the eye and into the drainage channel. The new blood vessels can cause eye pressure to rise by blocking the outflow of aqueous. This type of glaucoma is usually associated with other eye conditions like diabetic retinopathy.

Pigment dispersion syndrome occurs when the pigment granules in the iris (the coloured part of your eye) break away and clog up the trabecular meshwork. If the trabecular meshwork is blocked, it is almost impossible for the aqueous to drain effectively and this results in increased eye pressure. This puts extra pressure on the optic nerve and can result in damage to vision. This condition is more common in young, short sighted men.

Pseudoexfoliation occurs when the edge of the lens starts to flake away like dandruff, and clog up the trabecular meshwork. The lens sits behind the iris and helps to focus light so we can see clearly. The flaky dandruff stops the aqueous draining away, and this can raise eye pressure and damage the optic nerve. This condition tends to be more common in older people and in people of Scandinavian and Southern Mediterranean origin.

Trauma  can mean either a blow to the eye, a penetrating injury (when something pierces the eye) or a chemical injury (such as an alkali burn). It can happen immediately after the injury or develop over time. Blunt trauma (such as a blow to the eye) can affect the shape of the eye, meaning the pressure builds up over several years. People affected will need to be monitored to limit the chance of developing glaucoma in the future.

Uveitis occurs when a part of the eye called the uvea becomes swollen and inflamed. If uveitis leads to increased pressure, which then causes damage to the optic nerve, we get uveitic glaucoma. The uvea is made up of the iris, ciliary body and choroid – see the diagram above.

Secondary ocular hypertension, or increased eye pressure can occur following disease or surgery on the cornea. The cornea is the clear window at the front of the eye. Corneal infections (viral or bacterial) or corneal burns can cause inflammation leading to raised eye pressure. Many corneal conditions require the use of long-term steroid eye drops which can result in increased eye pressure.

Other conditions associated with secondary glaucoma include iridocornealendothelial (ICE syndrome), bleeding inside the eye, raised episceral venous pressure and tumours. 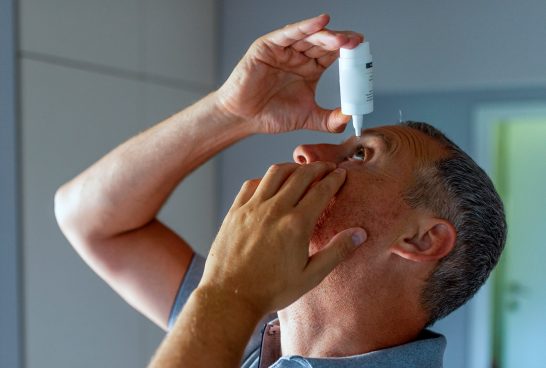 Treatment of secondary glaucoma will depend on what’s causing it in the first place. The aim of any treatment will be to try and bring the pressure down into the normal range to slow down any further damage. Some issues can be managed using specific interventions, like removing a cataract or a change in medication but others are more complicated and long term.

Doctors have a range of treatments available to them, from eye drops to laser treatment and surgery but your treatment plan will depend on many factors including your general health and medical history. More information about treatments and surgery can be found here.

Want to talk about glaucoma?

If you have more questions about glaucoma, our helpline advisors are happy to help.

Find out more about our helpline