Chris Johnson has lived with glaucoma for the past 40 years. Despite extensive procedures, he has still retained good sight. He believes this shows what can be achieved if you fully adhere to your prescribed treatment. 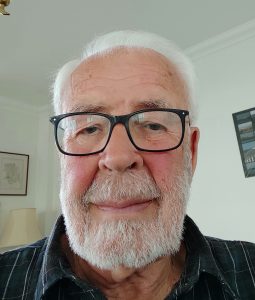 Having glaucoma is not a disaster. I have lived with the disease for 40 years and can still see.

I felt concerned when I was told I had glaucoma following a routine eye test. It was 1982 and back then, the people I knew with the disease had lost the majority of their sight within 15 years of diagnosis. Yet 40 years and many procedures later, I can still see well. I firmly believe this has been due not only to the skills of many eye surgeons, but also by being 100% compliant with using my eye drops. And though 15 years of declining sight was a realistic expectation in 1982, my view is that most people diagnosed now can expect to retain the majority of their sight indefinitely, thanks to the advances in eye surgery and eye drops. But only if they aim for 100% drop compliance.

I have had many treatments over the years. I’ve used drops in both eyes from the start, but in my left eye I’ve also had five trabeculectomies, three cyclodiodes and numerous laser treatments, as well as a cataract operation, a detached retina and cornea replacement. Remarkably, the left eye can still see a bit, with major glaucoma dark areas. By this, I mean areas where glaucoma has destroyed vision. There lies the real risk of glaucoma. Because these areas appear normal in daily use, so you don’t know that you can’t see them, and this only becomes apparent when doing a visual field test. I find this quite traumatic. The sight in my right eye has been fully preserved, following one trabeculectomy, one cyclodiode and many laser treatments.

I would advise anyone newly diagnosed to take all operations offered. Understand why they are necessary and find out the expected outcome. But most important of all, be 100% compliant in putting in your eye drops. For me, if I miss even just one application, then I have a bad year of it. From the outset, I have lain on my back to ensure the drops get correctly into the eyes.

I have been a life member of Glaucoma UK since I was first diagnosed and heard about the charity through friends who had glaucoma. Reading all the information they have available, as well as attending their annual lectures, has been very useful.

Just as important has been that I demand to know my eye pressures at every consultation, with an explanation of what has been found and its interpretation. I have a log of every appointment attended (other than some early ones which were lost during computer crashes). I always make sure that I have regular checks, although the impact of COVID-19 over the past year has meant that some of my routine inspections were cancelled. As a result, I have made full use of a local optician to monitor my eye health. As close relatives have an increased risk of developing glaucoma, my children always ensure they have annual eye tests.

Having glaucoma is not a disaster. I have lived with the disease for 40 years and can still see. If you are diagnosed with glaucoma, learn all you can about it, and always aim to be 100% compliant with your treatment. My experience has shown the true value of that.