Christine was only 35 years old when she was diagnosed with glaucoma in the mid-1980s. Her experiences of living with the disease have encouraged her daughter to have regular sight tests. 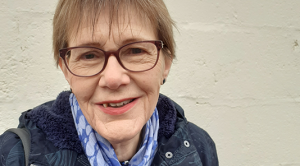 It’s not just a disease of the elderly.

I was diagnosed with glaucoma in 1984 at the age of 35, shortly after giving birth. I had raised blood pressure and my GP advised me to get my sight tested, as we had a family history of glaucoma due to my dad having had the disease. Although I wore glasses, I hadn’t had an eye test for several years. The optician found that my pressures were raised, so I was referred to a consultant who recommended trabeculectomy in both eyes. Unfortunately, we were about to leave the UK for my husband’s job and there wasn’t time before we left, so I was faced with having to get treatment in France.

I felt a bit panicked at the time. There was so much going on with the new baby, the move abroad and now the prospect of two eye operations. I contacted Glaucoma UK (which was then called the International Glaucoma Association) and got some information leaflets to get a better understanding of what was happening, just in case anything got lost in translation. At the same time, I worked hard to improve my French.

Back then, the little I knew about glaucoma wasn’t positive. My father was diagnosed with the disease in the mid-1960s, shortly before he died, but his diagnosis came too late. He had always been very short-sighted and attended the School for the Blind as a teenager. He was told that there was little that could be done and that it was likely he’d need to register as blind.

Most of the time my diagnosis has very little impact on my life, but it’s been a worry when there have been episodes of raised pressures and changes in my visual field. Everything is stable at the moment but I’m a bit nervous about the future as I have early stage cataracts, and I’ve found it difficult to get advice about the long term implications. On a practical level, having glaucoma has meant that I’m not happy driving in poor light, which was a worry when I was working and needed to attend evening meetings.

My experiences, and the fact I was diagnosed so young, have made my daughter very aware and careful about eye health, especially as she also has a family history of glaucoma on her father’s side. She thankfully has shown no signs of raised pressures, but she has regular eye tests as she wants to get treatment early if she develops the disease. Operations always sound scary, but she’s aware from my history that the treatment options are improving all the time. For my first trabeculectomy in 1985, I was in hospital for several days – by my fourth one in 2004, I was home in a few hours with the bandage off the next day.

My story shows why it’s so important for people to get their eyes tested regularly, particularly if they have a family history of glaucoma. It’s not just a disease of the elderly – I was only 35 when diagnosed. Although it can make you blind, it won’t if it’s caught early. And if you are diagnosed with glaucoma, then make sure you get into a routine with your drops. Set an alarm on your phone and buy a small mirror to stick on the back of one of your kitchen cupboards, as the lighting is always better in that room of the house. Putting in eye drops every day is a very small price to pay for being able to see.