I was lucky - Frances' story

Frances Baillie was diagnosed with glaucoma following a routine eye check-up. Prior to her diagnosis, she had no idea that there was anything wrong. 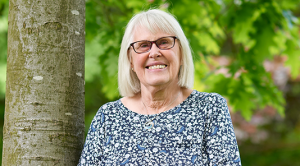 I was lucky to be diagnosed and treated in the early stages because it’s meant that my glaucoma has had very little impact on my life.

I was diagnosed with glaucoma in March 2000. I am short-sighted, and at that time I saw my optometrist every two years for a check-up. It was then that he found borderline pressure in my left eye and referred me to the eye clinic at the hospital, where I was told I had open angle glaucoma. I was given drops for my left eye and a year or so later I also began to take drops for the right one. I have since also had two sessions of selective laser trabeculoplasty (SLT).

I was surprised when I was diagnosed with glaucoma because I had no idea there was anything wrong. I didn’t know very much about the disease, other than it had something to do with eye pressures. My father’s cousin had glaucoma, so there is a family history of it.

Following my diagnosis, I told my son that he was at increased risk of developing the disease. He’s in his mid-thirties and is also short-sighted. He has worn glasses since childhood, so his optometrist always checks his pressures at his routine appointments. He can’t change the fact that his mother has glaucoma and that it runs in families but he’s aware how important it is for him to carry on with his routine check-ups.

My advice to anyone newly diagnosed would be to keep a diary of all your visits to the optometrist and eye clinic. Make a note of what medication you’re prescribed and make sure to ask questions. I’d also recommend you become a member of Glaucoma UK – it’s the best decision I ever made! I was given a Glaucoma UK booklet at the eye clinic which was very helpful in providing me with information about glaucoma, and how Glaucoma UK can help. They give excellent advice, and their website helped me to find out what support services were available to me. I have attended many glaucoma support group meetings in the past, both in Glasgow and Edinburgh. Every one of them has given me valuable information. They are very friendly and welcoming, and they always have interesting guest speakers. I have learned something new at each one and always look forward to attending. It’s also a great way to meet with other people who have glaucoma, to hear of their experiences and swap ideas. Charities like Glaucoma UK are so important, not only because of the help and support they offer, but also because they give peace of mind when information can’t always be found elsewhere.

I was lucky to be diagnosed and treated in the early stages because it’s meant that my glaucoma has had very little impact on my life. Thankfully, my early diagnosis meant I started treatment before there was any noticeable damage to my sight. I would urge anyone to make an appointment with an optometrist for a check-up, even if you don’t wear glasses or only wear them for reading. I live in Scotland and eye tests are free here. You will not be obliged to buy glasses, even if you are given a prescription, but if they find a problem then it means it can be dealt with at an earlier stage and it could prevent sight loss.

For information on eye tests, including how to find out whether you are eligible for a free test, visit our diagnosis page.