Jane Sibley was shocked when she was diagnosed with glaucoma in 2014. Finding out as much as she can about the disease has helped her to continue leading a normal life. 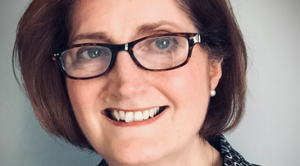 I’ve learnt to take things as they come and to try not to predict the future. A good thing to do in any circumstances.

My optician discovered that I had increased pressure in both eyes during a regular check-up in 2005 and referred me to the local hospital. After years of being monitored for ocular hypertension, it was a shock when I was finally diagnosed with glaucoma in 2014. I’d been under the impression that it was unlikely I’d develop the disease because I had no family history of it. The doctor at the hospital was lovely but it was a lot of information to take in in a short amount of time, and I think I was in denial for a while.

I’d heard of glaucoma but knew very little about it, so I began to research it and found the Glaucoma UK website (it was known as the International Glaucoma Association back then). It really helped me in the early days with general information. Particularly with what to expect from my appointments and information on how to put in eye drops. It gave me confidence that I was doing everything I could to slow the progression. I also called the charity’s helpline at the time, for their advice.

I’ve been prescribed a large number of eye drops since being diagnosed. Unfortunately, none of them completely controlled the pressure in my eyes, and in February 2019 I underwent a trabeculectomy with an iridotomy in my right eye. I used Glaucoma UK’s buddy scheme ahead of the surgery to speak to someone who had already been through the procedure, and who was able to answer any questions I may have.

The surgery initially brought the pressure right down, but unfortunately, it started to increase again 18 months later, causing more damage to my optic nerve. As a result, I had to start using eye drops again. I now need a trabeculectomy in my left eye and at the time of writing this, I’m still waiting to find out when that will happen.

Thankfully, COVID-19 hasn’t really affected my treatment. I attend Moorfields in London, and they set up a technician led clinic where all the usual tests such as pressure checks, visual fields and scans were carried out. The results are sent through to the consultants for review, and they then contact the patient by phone or letter. I have also attended a couple of consultant-led clinics. The new way of dealing with appointments has worked well for me.

There have been some very worrying times as I worked through various eye drops and realised that my glaucoma wasn’t easily controlled by drops alone. However, after nearly eight years of treatment, I am still driving and doing everything I want to do. I’ve learnt to take things as they come and to try not to predict the future. A good thing to do in any circumstances.

One of the things I have found the most difficult with my glaucoma experience has been learning to trust the doctors. With open angle glaucoma there tends to be no symptoms, so you are completely reliant on the doctors to tell you if things have got worse. It can be hard to get your head around having some of the treatments without any obvious symptoms, particularly surgery.

I recently joined some of Glaucoma UK’s digital glaucoma support groups and watched the webinars online. The support I have received from the charity has been invaluable. I’m sure my experience through diagnosis and treatment would have been very much poorer without access to such a reliable source of information. It’s so important for anyone with glaucoma to get as much information as they can about the disease. Knowledge of your glaucoma will help you to realise that you can continue to lead the life you want to lead. There’s a lot of support out there.