Liz Hammond was diagnosed with glaucoma in 1998 and had severe reactions to many eye drops before eventually having surgery. 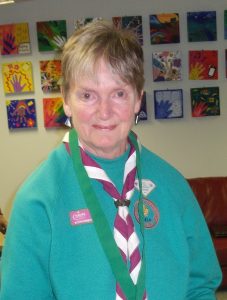 I was put on eye drops to treat my glaucoma but started to experience severe reactions to some of them.

I was diagnosed with glaucoma in 1998, following a referral after a routine eye test. I felt slightly shocked by the diagnosis, as my eye pressure was always fairly high when tested at the optician’s. Also, my parents didn’t have glaucoma and I didn’t think there was a family history of it. I have since discovered that two of my siblings have glaucoma, as well as cousins on both sides of the family.

All I knew about glaucoma at the time of my diagnosis was that it was related to eye pressure and could cause some loss of vision. I was not given any information about the disease by the staff at the hospital, but my husband happened to pick up a Glaucoma UK booklet in the waiting room which was most helpful. I became a member and phoned the helpline a few times in the early years for advice about problems with eye drops. It was good to get help and advice from a knowledgeable person, independent from hospital staff who didn’t always have the time to listen about side-effects from medication.

I was put on eye drops to treat my glaucoma but started to experience severe reactions to some of them. Problems with medication did cause me a certain amount of anxiety and distress. Phone calls to the Eye Clinic usually resulted in advice to see my GP, which is when a phone call to the Glaucoma UK helpline was a blessing.

I used one lot of eye drops quite happily for about a year, but I gradually became aware of a decreasing level of energy. I was 53 at the time, and reasonably fit and healthy, but I began feeling exhausted after carrying out simple tasks, like vacuuming. I also started to experience strange fluttering sensations in my chest.

Another set of drops started fine for the first few months, but then I experienced very red and sore eyes, which then meant I couldn’t sleep.

One particular drop gave me a tingling feeling which started at the top of my neck and spread upwards across the top of my head. When it cleared it was replaced by pain, starting at the top of my chest and moving lower down through my body and finally affecting both thighs before finally clearing away. I tried to describe the experience to a doctor at the eye clinic as I thought this was quite a serious reaction, but he merely wrote ‘headaches’ on my notes. I discovered this when a different doctor tried to persuade me to try those particular drops again, which I refused.

On a more positive note, I was able to use Zalatan without too many problems, but in the end that was not enough on its own. I ended up having surgery, first a trabeculoplasty and then finally a trabeculectomy to both eyes in 2009.

I had been extremely worried about the prospect of undergoing surgery. I relied on the information found in the Glaucoma UK magazines and also on the advice given to me by an elderly neighbour who had himself received both laser treatment and trabeculectomy. I have to own up at this point to having had the ‘Trabs’ at a local private hospital, partly because a fellow sufferer had strongly recommended it, but also because the operations would be carried out by the Hospital Consultant. I was not given any information specific to trabeculectomy, the private hospital could only provide a leaflet describing cataract surgery. It was a good experience and gave me the confidence to have my own cataract surgery at the NHS Eye Clinic at Shoreham, which was carried out in March 2021.

Though I was very anxious about surgery, I found the experience very quiet and calm. You are well looked after and are hardly aware of what the surgeon is doing.

I have been fortunate in that I have not needed eye drops to treat my glaucoma for the past twelve years since having my trabeculectomies. The freedom from obtaining prescriptions and the daily routine of putting the drops in at the right time each day is good.