Margaret Davison was in her thirties when she was diagnosed with glaucoma. Specialists at the time believed she was too young to develop the disease. 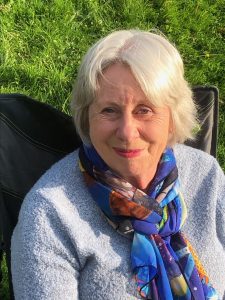 I’ve just learned to live with my glaucoma and feel thankful that it’s not a life-threatening condition.

I was in my thirties when I was diagnosed with glaucoma and up until that point, my vision had been very good. In the late 70s I had a routine eye test and the optician noticed cupped discs, so I was immediately sent to a local Eye Hospital. After that, various eye specialists said that it couldn’t be glaucoma as I was too young and there was no family history of the disease. I was working as a community pharmacist, so had some medical knowledge, and felt something wasn’t right, so I made a fuss and kept badgering my GP and the specialists. Some years later, having moved from Sussex closer to London, I was finally sent to Moorfields, where an extremely thorough doctor diagnosed glaucoma and I’ve been a patient there ever since.

I was annoyed rather than distressed when the diagnosis came through, because I felt the delay in being diagnosed had affected my vision, but there was little I could do about it by then. I was also glad that I could now be treated and was given helpful information about the disease by the hospital staff.

I had no problem with being diagnosed so young, I was just relieved that it could be treated and that, with luck, my sight could be saved.

I’ve used many different drops over the years, and now have to use the preservative-free ones as I developed an allergic reaction to the preservative and some of the drops. I’ve also had a number of attacks of Uveitis over the last 18 years, mainly in my left eye, although this seems to have burnt itself out now. This, in addition to glaucoma, means that my left eye is very poor and has ‘hand movement only’ vision. I am unable to see the eye chart out of that eye, nor a letter held close to me, nor how many fingers the nurse is holding up! However, I can detect movement, hence ‘hand movement only’. Neither of my eyes accommodates, so going from bright light to dark or vice versa is very challenging. Seeing the edges of steps when going down them can be tricky as well. But once you are aware of these disadvantages, you just take extra care.

Some years ago, the Uveitis department asked if I would be willing, along with other patients, to be examined by eye doctors from district hospitals and from abroad as part of their training sessions. They wanted patients with unusual or complex eye problems for these doctors to diagnose and see if they could detect them! A fascinating experience although very tiring and I hope that this helped in the early diagnosis and therefore treatment of eye problems in other people.

I had a Trabeculectomy in 2017 at Moorfields to prevent further deterioration in my right eye which seems to have been very successful. Due to COVID-19, my Moorfields appointments have been postponed and reduced to annual ones, mainly I presume because I seem to be stable now. However, we have an excellent optician, and I’ve had examinations and scans from him and so far there’s been no further deterioration.

I think I’m very lucky, despite only having vision in one eye. I’ve just learned to live with my glaucoma and feel thankful that it’s not a life-threatening condition. Despite some restrictions, I’m able to lead a happy ‘normal’ life. Though obviously it can be very annoying sometimes!

My advice to anyone newly diagnosed with glaucoma, especially if you are young as I was, is to not feel frightened or down about it. There’s so much gloom and despondency, I think it’s good to focus on what you can do rather than regretting what you can’t. Keep your appointments and use your drops regularly. If you are concerned that things are changing, seek help immediately. Never be afraid to sit in an A&E if you are concerned. Also, optometrists these days have a great deal of equipment in their surgeries, so use them as well. Treatments are so much better now. My first visual field test was a doctor holding a hatpin in front of a velvet curtain; things have moved on a lot since then! And who knows, one day there might be a cure.