Matt Treweek was told he might have glaucoma. The delays in treatment due to COVID-19 mean that he is still awaiting a diagnosis. He has shared his concerns about the impact these delays could have on his vision. 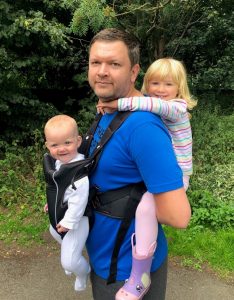 The impact of COVID-19 has meant that I’ve felt like I’ve been in no man’s land. It has delayed a definitive diagnosis.

I went for an eye test as I hadn’t had one for a while and felt that my eyesight wasn’t as good as it had previously been. When my peripheral vision was tested, I scored poorly with my right eye. The optician decided to refer me for an ophthalmology appointment. He didn’t think I had glaucoma as my pressures were within normal range, though at the higher end.

The ophthalmologist did some tests, after which he told me that I had glaucoma in a very matter of fact way. He explained very little, other than I have the version where the pressures in my eyes are normal, but I am still getting damage. He gave me a prescription for eye drops and then I was given the distinct impression that he was waiting for me to leave. I was so shocked and disappointed by his attitude that at the time, I couldn’t think of any of the things that I probably should have asked. All I asked him was whether I was ok to drive. His response was that I am as long as I have one good eye.

I knew very little about glaucoma before I saw the specialist. My mum has had it for over 20 years. My uncle, her brother, has it too. The pressures in my mum’s eyes had been too high and caused damage. I had always thought of glaucoma as experiencing tunnel vision.

My second appointment took place a month later, in March 2020, a few days before the UK went into its first lockdown due to the COVID-19 pandemic. I saw a different consultant, who was considerably nicer than the first and explained a little more. Unfortunately, my notes hadn’t been transferred over to the clinic so he couldn’t compare my pressures and previous results. But he told me that my visual field loss and strong family history of glaucoma meant that it was probable that I had the disease, which is why the previous consultant had put me on drops. He told me to see what happens, to return for an appointment in three months, and to continue with the drops in the meantime as taking them would do no harm.

Unfortunately, probably due to COVID-19, I never received the three-month follow up appointment, nor did I ever receive any information about whether it had been cancelled or deferred. Five months after my appointment, and still without news, I spoke to my GP who suggested I contact my consultant’s secretary. I did this and she said she would pass on my details to the consultant, but I never heard anything back. When I read the guidance on the trust’s website, it implied that anyone who hadn’t had an appointment would have had their case reviewed and prioritised. So I took it to mean that I wasn’t a priority.

My sight and the way my eye feels seem to vary in different situations or environments, and this can sometimes make me feel anxious or irritable. I have two young daughters, aged three and one, and all I keep thinking about is that I might not get to watch them grow up or be able to see them on their wedding days, which has made me become more depressed in myself.

In December 2020 I finally managed to get a short notice cancellation appointment. I explained that I felt like I’d fallen through the cracks, as my appointment hadn’t been re-booked after the one I’d had nine months previously.

At the appointment, the doctor told me I would need to have an MRI scan of my head, to make sure there wasn’t anything else going on that could have caused my visual field loss. At the time of writing this in January 2021, I’ve had the scan and am now waiting for my follow up appointment to discuss the results, which will hopefully be in April if it goes ahead. If there isn’t anything of note from the MRI scan, then my diagnosis of glaucoma will be confirmed. Unfortunately the doctor didn’t really have an explanation for some of the issues I’ve experienced with my vision.

The impact of COVID-19 has meant that I’ve felt like I’ve been in no man’s land. It has delayed a definitive diagnosis. I haven’t known if the drops have been working, or if my peripheral vision is getting worse. Changes can be very gradual so they’re hard to monitor without medical appointments and support. If it is getting worse, there’s no going back. The problem is that we won’t know whether the delays in treatment caused by the pandemic will have life-changing consequences for people like me until it’s too late.

If you have been affected by the same issues as Matt and would like support or advice, we are here to help. Our community forum is a place where you can share your experiences and concerns with others, and our helpline team are also here to support you on 01233 64 81 70 or by email helpline@glaucoma.uk