Dry eye disease is a common eye disorder where the eyes don’t make enough tears, or the tears evaporate too quickly. One in every three people over the age of 65 will experience it, however younger people can have it too. Here, Elizabeth Balsom tells us her story of living with dry eye disease. 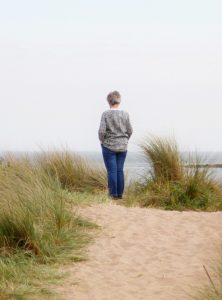 Make no mistake, dry eyes are uncomfortable, often painful and irritating in all senses of the word.

I’ve struggled with dry eyes since my late 20s; it’s not just an aspect of advanced years.

I have high myopia and have worn contact lenses since the age of 17. If you’re severely myopic like me, you get a better correction with contact lenses than with spectacles.

In the late 1970s, I had a couple of bouts of conjunctivitis and my eyes were very uncomfortable. According to my mother, my grandmother had glaucoma. She died before I was born. As the disease ran in the family, I decided to speak to my GP about my concerns. He referred me to a specialist in Harley Street, who confirmed I didn’t have glaucoma but suggested that I may be allergic to my contact lenses. I was then sent to see a contact lens specialist in London, who confirmed that I had dry eyes. At the time, he prescribed drops that had been developed as part of the NASA space programme. I suppose because in the space capsules it gets quite dry!

Having dry eyes has impacted my day to day life, particularly when I was still wearing contact lenses and working. At weekends I’d be lying on my bed in a darkened room, glad to get the lenses out and rest my eyes, rather than going out and doing things. My eyes were so dry and itchy, so I tried to use whatever lubricant I could. Working in an office could be challenging at times, because they’re very often air-conditioned and dry, which made my eyes worse.

It can be a pain, as however uncomfortable your eyes feel, you mustn’t touch them. I remember my ophthalmologist telling me not to rub my eyes, and that if ever I felt my hands drifting towards them, I should think first about what that hand had touched and where it had been. I think this advice still stands today, particularly with the onset of COVID-19 and the possibility of it being transferred through your eyes.

I had cataract surgery in my mid-50s, and so no longer wear contact lenses anymore, which has helped. But make no mistake, dry eyes are uncomfortable, often painful and irritating in all senses of the word. I recently began to experience twitching in my lower left eyelid which scared me as my father, who died when I was 11, had early onset-Parkinson’s. But my optometrist told me that twitching is a normal feature if you have dry eyes and is called myokymia, which I’d never heard of.

Knowing what drops are best can be difficult sometimes as I found some to be intolerable, but the Glaucoma UK helpline have been very supportive with that. If you’ve got sight problems or something wrong with your eyes, I would recommend you join organisations like Glaucoma UK. Eye clinics don’t always tell you much, nor have the time to really answer your concerns, so it’s important you explore other avenues.

The Glaucoma UK helpline also helped to reassure me that pressure-lowering treatments such as drops or surgery don’t exacerbate dry eye disease. I often used to wonder if it might be the case, since their purpose seems to be to reduce the amount of fluid in the eye. They explained that glaucoma eye drops, and particularly the preservatives inside the drops, can sometimes affect the quality of the surface of the eye, which can make it feel dry. As with so many things medical, it does feel sometimes like you’re between a rock and a hard place.