Rosie Cheer was diagnosed with advanced glaucoma in both eyes. Since being diagnosed, she has begun to realise the psychological impact that having glaucoma can have and has shared her tips on how best to manage life with the disease. 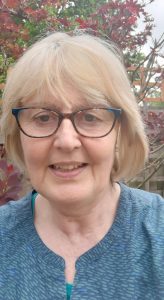 I recently decided to learn as much as I can about any strategies, aids and resources that might help, should my eyesight deteriorate further.

I was diagnosed with advanced glaucoma in both eyes during a routine eye test in 2014. At the time I had experienced a little difficulty with my eyesight but had put it down to another eye condition I have in my left eye, asteroid hyalosis.

I was seen by a consultant ophthalmologist, and the tests I had highlighted to me how poor my eyesight was in my left eye, which was something that I hadn’t fully realised. I was immediately referred to the hospital glaucoma clinic, where I received my official diagnosis.

I had no prior knowledge of the disease and felt shocked on hearing my diagnosis, particularly when I found out that I had glaucoma in both eyes. My treatment began with eye drops. I then had trabeculectomy on both eyes, and had needling done at various times. I was finally put back on eye drops.

I was still allowed to drive to begin with, so life continued with minimal change, and I became slightly in denial that anything was wrong. I think reality hit home about the impact that glaucoma was having on my life when I had to surrender my driving licence to the DVLA in 2016. Up to that point, I’d gradually been adapting by only driving during daylight hours and staying local. I now walk everywhere and use local transport when possible. I just have to plan ahead a lot more and allow more time.

If looking after my grandchildren, they had to be brought to me, instead of me going to them. They learned how to use the bus and I asked them to be my eyes. I have had to reassess what activities I can do. I stopped playing tennis, after 40+ years of enjoying the sport. I now volunteer at a local food bank and do fitness classes when I can.

For me, some of the main challenges of having glaucoma and experiencing sight loss are things such as crossing the road, as I don’t always see cars or bikes. I find it difficult to judge depth, so going up and down the stairs can be difficult, especially if the lighting is poor. I always hold the rail or ask a friend for their arm. I have some trouble with reading and recognising colours or people’s faces. I’m also far more cautious about going to large events.

Explaining how glaucoma was affecting my eyesight was not easy. I now realise it took me a while to recognise which aspects I struggled with and communicate this to others. You only realise you haven’t seen something if someone points it out to you. For example, when I walked straight past my sister, having ‘looked’ directly at her.

I think as well as affecting you physically, being diagnosed with glaucoma can also affect you psychologically. I initially concentrated on the physical side and have only recently begun coming to terms with the psychological effects. My loss of sight and clarity can sometimes make me feel a little vulnerable. It has also made me feel a loss of independence and identity, because I’ve had to review what I can and can’t do, such as driving or a hobby, and this takes time to adjust to.

But I’m beginning to be more open about it and asking for help. In June 2019, I plucked up the courage to speak with the eye clinic liaison officer at the hospital. It was amazing to speak with someone who understood some of the issues I was facing. He recommended I see someone from the low vision clinic. I made a list of all the challenges I was experiencing, and then put down any solutions I had come up with myself. This then helped the low vision clinic and I to focus on exactly where they could help.

I have been very fortunate that I still have some reasonable eyesight. I recently decided to learn as much as I can about any strategies, aids and resources that might help, should my eyesight deteriorate further.

I sometimes use a white symbol cane. I felt a bit of a fraud for using it at first because I’m not registered blind or partially sighted. But I’ve found that it empowers me because it makes others aware and helps them to understand.

A relative once commented that no one looking at me would know that I have a problem with my eyesight, and this prompted me to start wearing a badge in busy areas which states ‘Please be patient, I have low vision’. A couple of strangers at the train station once offered me help having seen the badge, which I really appreciated.

I am also now making more of an effort to make people around me aware. I may say “I don’t see that well these days, can you help me find….” or “Can you show me…”. I thank anyone who offers to help me, even if I don’t take them up on their offer.

I purchased some sticky rubber dots from my local shop and use these to stick on measuring jugs at relevant levels, as I struggle to see the markings. They are simple and effective as I can feel them, as well as see them.

Another great resource is a pocket LED magnifier, which was provided to me by the low vision clinic. It’s great for reading small print on packaging at home or in the shop. It’s also proved very useful when threading a sewing needle!

I’ve changed some of the lightbulbs at home, as for me I find the brighter the light, the more it helps, though I realise this isn’t the same for everyone. Another great tip that someone gave me was to use an elastic band to differentiate between two similar bottles holding different liquids – simple, but brilliant.

I still have a lot of learning to do. I use a smart speaker as a timer for putting in eye drops, and I want to learn how to use smart technology more effectively. Thankfully, my eye pressures appear to have stabilised in the past year. But it has been helpful to reflect on my journey with glaucoma, and to consider what I can do in the future to manage myself better.