Roy Hathaway’s parents both have glaucoma, and he wasn’t initially aware that the disease could be hereditary. He has shared his experiences of inheriting glaucoma and the impact it’s had on his life. 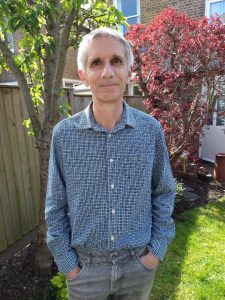 I think I first became aware that it could be hereditary when I was told by my optician that I was eligible for free eye tests if one of my parents had glaucoma.

I was first diagnosed with progressive normal pressure glaucoma in both eyes in July 2008.

I had been short-sighted since my early twenties, so I attended my opticians regularly to get my sight checked and my glasses prescription updated. My optician carried out regular visual fields tests and in 2005 identified a visual field defect. My mother and father both have glaucoma, so based on my family history of the disease and my results, the optician suggested I ask my GP for a referral to the hospital’s glaucoma clinic. I have attended the hospital regularly from late 2005 onwards, and they made the glaucoma diagnosis in 2008, when I was 52.

My father and the optician shared general information about glaucoma with me. I understood it to be a gradual loss of peripheral vision due to high pressure in the eyes, and that it was effectively irreversible.

My father was first diagnosed with glaucoma in his mid-sixties and my mother was told she had the disease at the age of 70. So, I was diagnosed at a much younger age than either of them. Glaucoma has not had a significant impact on their quality of life. Both of them have had it relatively mildly, though my father’s glaucoma has gradually worsened over time.

My father can’t recall being asked to alert his family about the fact that glaucoma is hereditary, as I was when I was diagnosed. I subsequently informed my brother and my two daughters. I think I first became aware that it could be hereditary when I was told by my optician that I was eligible for free eye tests if one of my parents had glaucoma. I was fairly philosophical about this. There was nothing I felt I could do about it except keep getting my eyes tested regularly, which I was doing anyway because of my myopia.

The impact of my diagnosis on my lifestyle hasn’t been too bad. I was naturally concerned when I was told I had the disease, particularly as I had to inform the DVLA of the diagnosis. I had to undergo testing to ensure I remained fit to drive and was thankfully easily able to satisfy the required medical standards of fitness to drive set by the DVLA.

I received information from the hospital, including some Glaucoma UK leaflets, and so decided to become a life member of the charity to access further information and to support research into the disease.

I was prescribed eye drops to control the pressure in my eyes. Over the years since then the number and frequency of the doses I need to take has increased, and I now must put in eye drops four times a day, which is inconvenient. Fortunately, this increased regime did not come in until after I’d retired. I could fit three times a day around work by taking them after breakfast, when I first got home from work, and last thing at night. I have a fairly set routine for putting in eye drops four times a day now that I’m retired, but it would have been difficult to do if I had still been working in an office. Now I put in the drops after breakfast, after lunch, in the early evening and just before I go to sleep.

My advice to anyone newly diagnosed is to stay positive, because there are treatments available which can help, but also to learn how to put in the eye drops because it’s not as easy as it looks! For me, what works best is to lie on a bed with my head on a pillow and put a drop in the corner of each eye, then close the eyes and lie still while I count out two minutes. When I was first prescribed eye drops, I used a dispenser I obtained via Glaucoma UK. This worked well for some bottle shapes but less so for others. Nowadays I don’t use the dispenser as I have become better at putting in drops without it. The pressure you apply has to vary according to the shape of the bottle and how full it is. The trick is to learn how to squeeze the bottle just hard enough but not too hard, and for me that took practice.