At almost 89 years old, Verno* is living with deafness, post-polio syndrome and advanced glaucoma. Here, he shares his story with us.

(*Name has been changed to protect the author’s privacy.) 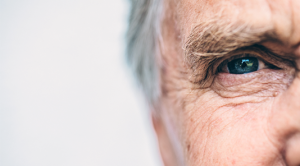 I joke that I am “Blind as a bat, deaf as a post, wobbly as a jelly and sharp as a tack!”

On 5 April 1955, as a 22-year-old naval officer, I collapsed at home while on leave, having just crewed a new minesweeper from the Clyde to Southampton via Loch Ness. I was diagnosed with polio by Bristol NHS Isolation Hospital and believe I must have caught the virus in Scotland. I was initially paralysed below the waist but was hardly affected above. After five months in hospital and eight more of naval Light Duty combined with continued rehab, the Navy took a gamble and allowed me to resume my career. I retired from the Navy in 1982, and from my second uniformed career in HM Coastguard on 5 April 1995 – 40 years to the day since being struck down with polio.

Deafness started in the 1990s but for the past 12 years has been kept at bay by multi-mode hearing aids. Even so, cyclists and electric vehicles are a hazard, as I can’t hear or see them. I wouldn’t dare cross a street unescorted.

I was diagnosed with glaucoma in 2001 and banned from driving in 2009. My wife, who is now my carer, also became my driver, armed with a Blue Badge parking permit for polio and glaucoma.

I now walk with two sticks, braced on both lower legs. I’m at permanent risk of falling flat by tripping, or of jack-knifing if surprised by any pot-hole or down-step, however small. Such collapse is potentially very dangerous so I need to watch my every step, and glaucoma has made navigation even more hazardous. I never go out now unaccompanied.

My vision has so worsened since 2017 that I avoid using public transport or taxis. I shall never go abroad again. Travel other than by car would be too hazardous. Destination scenery and heritage would be meaningless. Although I can still see a long way, everything near or far is indistinct and opaque, like looking through old perspex. As a result, I can no longer recognise anybody, except maybe by their dog! I can only read digital print. I can’t read or write a letter, fill in forms, take or enjoy photos, shop, garden, do DIY and much else besides.

My salvation is my iMac computer, which I always view in colour reversal, white text on black background. I also use a big-key desk phone and printer. I download my newspaper’s digital edition onto an iPad and read documents with a Digital Text Reader. I download audio books on another iPad. I view television at 18” range on a 49” curved screen in brighter Sports Mode. This works quite well, but drama, films, sitcoms and fast-moving ball sports like tennis are beyond me. I also view TV at normal range through binoculars, which are also excellent  for live concerts or opera. The secret is to try every idea and gadget; some work for me, others don’t.

My consultant has recently confirmed that I’ve had further sight loss since March 2021. My glaucoma is stable, but the loss is now due to advancing age from a glaucoma-ravaged baseline. It’s now pointless to change medication or to operate, unless the eye drops fail to keep my pressures stable, so the outlook is ominous.

I joke that I am “Blind as a bat, deaf as a post, wobbly as a jelly and sharp as a tack!”. But I continue to live by the philosophy given me by Ann, my brilliant physiotherapist at Bristol Isolation Hospital, who inspired me to save my career 66 years ago: “Never complain. Get on with life. Accept your limitations.”