Glaucoma treatment through time: a guide for flappers and hippies 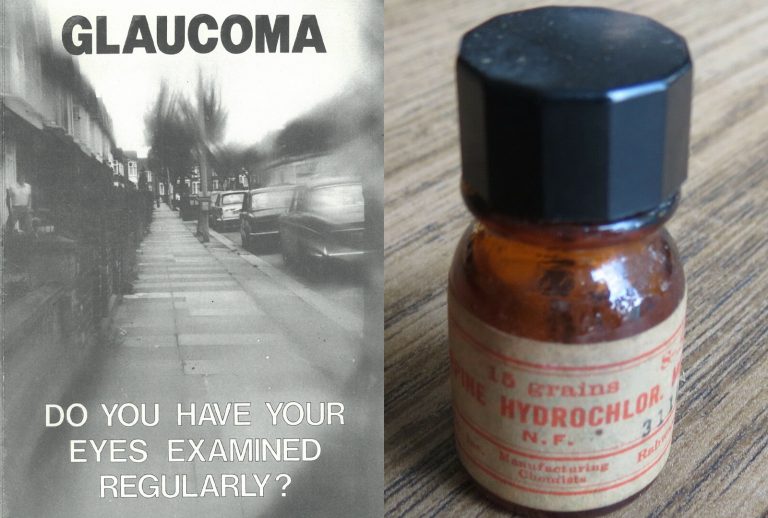 For anyone with glaucoma today, the range of different treatments can be bewildering. Depending on the stage and type of your glaucoma, and your personal preferences, you might be offered multiple eye drops, laser treatments or surgeries. You will also experience a lot of tests at glaucoma appointments, which aim to identify how your glaucoma is developing.

But if you had glaucoma in the past, how might it have been treated? In this article, we’re going to delve back 50 and 100 years to think about how your glaucoma might have been monitored, and to discuss what treatment would have been available to you back then.

Let’s roll back first to 1922. The year of the founding of the BBC, the discovery of Tutankhamun’s tomb and the first successful treatment of diabetes with insulin. Flappers in dresses with dropped waistlines danced to the Charleston and listened to Irving Berlin.

But how might your glaucoma have been monitored and diagnosed? The pressure in your eye might well have been measured using digital tonometry. This sounds fancy, but consisted of an ophthalmologist pressing on your eye with their finger! Your visual field might have been measured using some kind of Heath Robinson contraption with metal arcs and lights. Your ophthalmologist would probably have had an ophthalmoscope to look inside your eye, which was introduced in the mid-19th century. They would look at the optic disc and identify the cupping associated with glaucoma.

Ophthalmologists understood the principles of glaucoma at this time and knew about chronic and acute glaucoma. They knew they needed to reduce the production of fluid or increase the outflow of fluid from the eye. But treatments were fairly rudimentary and still very experimental. If you had primary open angle glaucoma which was developing slowly as you got older, you would probably would have viewed vision loss as an inevitable product of ageing. Sadly, most people who had glaucoma in 1922 would likely have lost their sight.

There were various medicines available but most of these have not withstood the test of time. Remarkably, pilocarpine has been available since 1877. Unfortunately, the formulation for the drop was not well developed and you may have had to put the drops in up to 40 times a day! Some doctors might have tried to prescribe salt water drops, to encourage the flow of fluid out of the eye by osmosis.

Surgical treatments were quite crude and reserved for people who had very painful glaucoma. If you were unlucky enough to have this type of glaucoma, you might have been offered an iridectomy, to remove part of your iris, or a sclerotomy, to create a cut in the sclera (the white of your eye). These treatments still exist today, but they are very rarely performed, as they have a high risk of complications.

So, what had changed by 1972? Fifty years ago, we were just a couple of years away from the founding of the Glaucoma Association (now Glaucoma UK) in 1974. This was the year of the Watergate scandal and Bloody Sunday while Donny Osmond was riding high in the charts with Puppy Love. Technological advances included the invention of the MRI machine and the first pocket calculator (a snip at $395).

You’ll be relieved to know that tonometry had become a lot more accurate, so eye pressure could be measured precisely. So had visual field testing, with the invention of a standardised perimetry machine, allowing comparison of results between different machines. In fact, the same ophthalmologist, Hans Goldmann, developed both systems!

By this time, ophthalmologists understood about open and closed angle glaucoma, and the use of gonioscopy to identify narrow angles was fairly established. More of the medicines available at this time might be familiar to you today – acetazolamide had been introduced in 1954, and early ancestors of timolol were being tested.

The big developments around this time were happening in the surgery for glaucoma. The trabeculectomy was introduced in the mid-1960s and has been a gold standard for glaucoma surgery ever since. This was the first successful and reliable surgery for the treatment of the disease. The method has been refined in the intervening years, but a surgeon from 1972 would recognise a trabeculectomy performed today. Alternatively, if you were being treated in Cape Town in South Africa, you might have been an early recipient of a Molteno shunt, a form of aqueous shunt (or drainage device) that is still available today.

Being diagnosed with glaucoma at this time would have been a scary proposition. There weren’t that many effective treatments available, and so you might well have lost significant vision. This is how Glaucoma UK (the Glaucoma Association then) was born. Our founder Ronald Pitts Crick, a consultant ophthalmologist at Kings College Hospital in London, recognised many people with glaucoma would lose their vision, and wanted to provide them with support and information.

In the years since 1972, huge progress has been made in glaucoma treatments. Most common classes of eye drop, which reduce eye pressure effectively without significant side effects, were introduced in the 1980s and 1990s. The big game-changer was the development of prostaglandin analogues in the mid-1990s, and these are now the most common type of eye drop prescribed for glaucoma. You’ll notice as well that laser treatment wasn’t offered in 1972. The first laser treatment, called argon laser trabeculoplasty, was tested in 1979. That’s now been superseded by selective laser trabeculoplasty (SLT), which is a much gentler form of laser. It is being offered more and more commonly to people with glaucoma and may replace drops as the main initial treatment for glaucoma in the NHS.

The developments in glaucoma care over the past 100 years have transformed the fortunes of people with glaucoma. In the past, people with the disease would almost certainly have lost vision, and people with acute glaucoma might well have lived with significant pain. Thanks to innovations in medicine, the chances of losing significant vision to glaucoma now are low. We have a range of effective treatments available, and you and your doctor can choose the right option for you according to your glaucoma and your lifestyle.

For anyone with glaucoma today, the range of different treatments can be bewildering. Depending on the stage and type of your glaucoma, and your personal preferences, you might be offered multiple eye drops, laser treatments or surgeries. You will also experience a lot of tests at glaucoma appointments, which aim to identify how your glaucoma […]