It has been a number of years since we started our campaign supporting Muslims to continue using their eye drops throughout Ramadan. 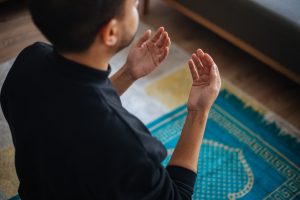 Robyn Asprey, Development Manager for Southern England, had the pleasure of catching up with a couple of people who helped support the campaign in previous years.

Dr Salman Waqar from the British Islamic Medical Association joined her to answer some questions about the campaign.

What has the campaign meant to you since it began?

It is really important to have mainstream charities like Glaucoma UK running campaigns like this, people trust their advice. It shows understanding of what Muslims are going through, and how important Ramadan is to their life. The campaign explains how Ramadan relates to health, and how to manage that. Combine that with cultural intelligence from institutions like Muslim Council of Britain and British Islamic Medical Association, it gives people with glaucoma confidence that this is something that they should take note of. Eye health is often something that people don’t think of enough until there is a problem and then you realise how important it is. Opportunities to reinforce positive messages around healthier eyes and managing glaucoma are all welcome.

It’s important to think about how we reduce inequalities and improve eye health, recognising that our communities are diverse.

Many haven’t recognised how important campaigns like this are for many underserved communities. That positive allyship is so important. Even though is a really simple one page document that you have made, it is really great to see and we have to thank you for being a leading voice in that. The campaign has been running for several years now, before covid, before health inequalities and coproduction became the talk of town. There are not many charities that are being so proactive in terms of advocating for Muslims. Wouldn’t it be great if there was more community orientated, co-produced patient information? This information is the start of creating relationships with communities. I really hope that more organisations and individuals reach out to yourselves through this campaign and we take this a step further. It’s important to think about how we reduce inequalities and improve eye health, recognising that our communities are diverse. We have to address inequalities and inequities and I think the fact that you have developed this resource is bridging that inequity. That is a really long way of saying thank you. 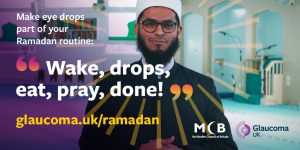 How have you used the messaging of the campaign in your work?

We do a lot of work around Ramadan and chronic disease management. We put together guidelines around lots of diseases, this is one campaign that we highlight. There can be an information overload so people can find it hard to access information that is relevant to them. One of the great things about the campaign is that it is really straightforward. Something that happens in Ramadan is that people may stop taking medications all together. Sometimes because they put all their faith in God for the month as it is so spiritual, or because routines change so much that people may just forget to take their medication.

I do think that one of the possibilities that Ramadan has, is that you can reset and renew people’s approach to health. Muslims are renewing their spiritual energy and being very aware of their charitable and communal obligations. They can make it a time to be more aware of their commitment to their own body and health. During Ramadan they have got 30 days to make a proactive habit.

Robyn also met with Dr Rabia Hassam, a practising GP who is also Muslim. She shared her experience of using the campaign with us.

What has the campaign meant to you?

It is interesting to raise awareness of people’s medical conditions during in Ramadan, getting them to talk, it has allowed me to start those conversations with people. You don’t always have those conversations either as family member or as a doctor, so it has helped me to say “ok you’re fasting, what does that mean for taking your drops?”. People with glaucoma don’t necessarily see the damage of not taking their drops short term and so may not realise how important it is to have them. It’s good to have had Islamic scholars who had the Islamic knowledge involved. It’s reassuring, them saying it is ok to take those drops during the day time over Ramadan if you wish. They are also saying if you want to be safe then do still take them, but before the fast starts and at the end of the fast is important. Giving people options and choice can be very empowering. 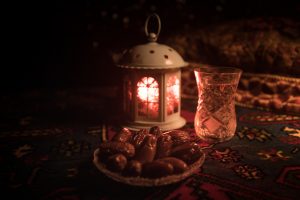 What is the feedback that you get from people when you have those conversations?

It is a really important topic and people are grateful that we are talking about it. It almost gives you permission to have those conversations about the difficulties that they may be having with drops. Whether it is because of fasting or completely unrelated things, it brings up the messages of honesty and openness so that has been good. What I really liked about the glaucoma campaign is that it acknowledges that it is difficult, that Ramadan is an important month, that it is busy. We know it is busy but don’t forget your drops. When you acknowledge people’s lived experience and understand the difficulties, that really helps to get people on board and listen to the messages. It is really important work that you are doing, that you are reaching out to the people for whom it is an issue.

A huge thank you to both Dr Rabia Hassam and Dr Salman Waqar for taking the time to talk to us about how they have used the campaign, and the impact it is making to peoples lives.

It has been a number of years since we started our campaign supporting Muslims to continue using their eye drops throughout Ramadan. Robyn Asprey, Development Manager for Southern England, had the pleasure of catching up with a couple of people who helped support the campaign in previous years. Dr Salman Waqar from the British Islamic […]