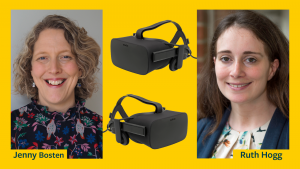 This article was originally written for Insight magazine by Jenny Bosten, University of Sussex, and Ruth Hogg, Queen’s University Belfast.

Previous research studies involving interviews with patients about their experiences of glaucoma monitoring highlighted a general dislike for the visual field test. Many patients find it long, old fashioned and tiring. Commercially available virtual reality (VR) headsets have the potential to be used for visual field testing. By allowing the patient to adopt a more natural seated position and testing both eyes simultaneously, VR headsets offer the possibility of both improving comfort and reducing testing time.

Glaucoma UK funded our research in 2016 to develop a new visual field test using a VR headset and compare its performance to a gold-standard clinical device, the Humphrey Field Analyser. We first developed custom software to run the test in an Oculus Rift VR headset. We designed the test to be as efficient as possible to allow the shortest possible testing time for patients while providing accurate and reliable results. First, we tested 46 young adult volunteers at the University of Sussex on the new test, in two independent sessions on different days. Data from the two sessions were compared to show that the test produced reliable results. When we calculated the average visual field across our volunteers from the new test, the results were as we expected based on standard published datasets gathered using current clinical devices.

Next, we tested 17 patients with primary open angle glaucoma at Queen’s University, Belfast. The patients also completed two sessions, and in each session had their visual fields tested both with the new test using the VR headset and the standard clinical test, the Humphrey Field Analyser. We found that both tests had comparable reliability and agreed with one another. 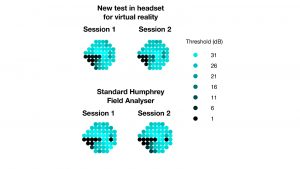 An example of our findings is shown in the figure (above), which presents a comparison between visual field maps for a patient gathered using the two different tests. In the figure, the dark points show areas of reduced visual sensitivity in the visual field. Our findings show that visual field testing using a VR headset generates results that are similarly reliable to the current gold standard test, and also that the new test agrees with the gold standard, showing it generates valid results. Our results demonstrate that it is possible to measure visual fields using a VR headset without loss of accuracy or reliability in the clinic.

We presented our results to experts in the field at the Imaging and Perimetry Society conference in August 2022 in Berkeley, California. Our findings agree with those of others published in recent years who have found promising results for visual field testing using VR headsets.

For the next steps in our research, we will seek to trial a version of our test for use at home, to explore the potential for patients to be able to take visual feld tests at home rather than attending a clinic. We are also hoping to trial the test for screening for glaucoma in countries or areas where standard clinical equipment is not widely available. We thank Glaucoma UK for enabling our research, which we hope will contribute to improving patients’ lives.