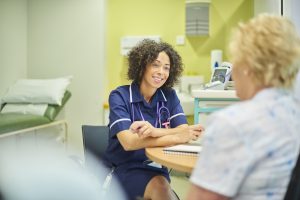 This article was originally written for Insight magazine.

For many years, eye drops have been the most common treatment for those diagnosed with glaucoma. However, evidence published in the medical journal Lancet in 2019 showed that laser treatment is at least as effective as eye drops in treating the most common types of glaucoma. In January 2022, the National Institute for Health and Care Excellence (NICE) updated its recommended guidelines for glaucoma treatment in light of this research. Joanna Bradley, our Head of Support Services, was on the NICE committee which undertook this work. Here, she speaks to her fellow committee member Ian Rodrigues, Consultant Ophthalmologist at Guy’s and St Thomas’ Hospital in London, to find out more.

What is SLT and how does it work?

Selective laser trabeculoplasty, or SLT, is a short laser procedure which is used to treat ocular hypertension and glaucoma. A laser beam is focused on the part of the eye where the fluid drains out, known as the trabecular meshwork. The laser beam stimulates the cells that drain the fluid, to make them work more effectively. This means they pump more fluid out of the eye and so reduce the pressure in the eye. SLT is carried out in the outpatient clinic, not the operating theatre, and takes around 5 to 10 minutes per eye. It uses a machine like a slit lamp, which you will be familiar with from your eye tests and regular glaucoma appointments.

How commonly is SLT offered now? Is it available everywhere?

SLT has been available for a long time, but not necessarily at every glaucoma clinic. It is a safer, gentler version of an older treatment called argon laser trabeculoplasty, or ALT. SLT is suitable for people with open angle glaucoma or ocular hypertension (raised eye pressure but no damage to vision). It isn’t normally suitable for people with angle closure glaucoma as the part of the eye treated in SLT isn’t usually visible in angle closure. It also isn’t recommended for people with glaucoma or ocular hypertension caused by pigment dispersion syndrome.

What did the NICE update look at?

A large randomised controlled trial published in 2019, called the LiGHT trial, produced new evidence which showed that SLT is very effective in treating primary open angle glaucoma (POAG) and primary ocular hypertension (POHT, i.e. raised eye pressure without an obvious and identified cause). The LiGHT trial recruited over 700 people who were newly diagnosed with POAG and POHT. Half were treated with SLT, and half were treated with eye drops. They were monitored for three years, to see whether there was any difference between the two groups in terms of:

The previous guidelines published by NICE for treating POAG and POHT recommended eye drops as the first treatment offered to people with glaucoma. However, the LiGHT trial showed that SLT was not only as effective as eye drops in treating glaucoma, but was also more cost-effective.

Therefore, NICE decided to update the guidelines in light of the new evidence. As a result of this update, NICE now recommend that SLT be offered as a first treatment for people newly diagnosed with POAG and POHT, with eye drops as an alternative option. This doesn’t mean that eye drops have become any less effective, or that eye drops won’t be available to patients.

How do NICE updates work?

There is a surveillance team at NICE that constantly looks at emerging evidence into treatments for different medical conditions. If the evidence is deemed to be significant enough, a decision is made to review the evidence thoroughly and update the guidelines as required. Only parts of the guidelines will be amended, according to what new evidence has become available. In this example, the NICE consultation didn’t look at everything to do with treating and managing glaucoma, but only the first treatment offered to people newly diagnosed with mild to moderate POAG and POHT.

A multi-disciplinary committee is recruited, which includes doctors, healthcare professionals such as pharmacists or optometrists as required, lay representatives (including from Glaucoma UK in this instance) and health economists. An evidence review is commissioned, which looks at all the evidence which has been published since the last update, and considers which evidence is relevant. It must meet strict criteria in terms of being robust and relevant. The team at NICE summarises the evidence, which includes an assessment of the health economics (how much money might be saved by society if the guidelines are implemented) and an equality assessment (will some people be more or less affected by these new guidelines). Over a series of committee meetings, the team evaluates the evidence and proposes changes to the current NICE guidelines.

The committee publishes draft guidelines, and these are sent out for public consultation. Anyone can take part in this consultation, but NICE encourage comments in particular from clinicians, charities, professional colleges such as the Royal College of Ophthalmologists and other relevant stakeholders such as pharmaceutical companies. Finally, the updated guidelines are published, along with implementation resources which help hospitals and healthcare providers actually put the guidance into place.

What are the advantages and disadvantages of receiving SLT compared to eye drops?

The LiGHT trial found the patients who received SLT had a similar quality of life to those treated with eye drops. Also, their glaucoma was better controlled – in the three years of the study, they were more likely to have their eye pressure at the target pressure[1] and less likely to need surgery.

The most common problem with SLT is that it sometimes doesn’t work or doesn’t last as long as we would hope. So you might need to have the SLT repeated, or you might need to start taking eye drops if the effects of SLT wear off.

What does it mean for someone newly diagnosed with POAG or OHT? How might their treatment journey change?

If you are newly diagnosed with POAG or POHT, you will probably be offered SLT as the first treatment. It doesn’t mean you have to have laser treatment, and other treatments will still be available.

If you receive SLT, there is a good chance you will not need to use any eye drops to control your glaucoma for several years. You may need to use some eye drops, but based on evidence from the LiGHT trial, if you receive SLT and it is successful, you will need fewer eye drops than if you don’t receive SLT. For example, people who have SLT might have their pressure controlled when only using one eye drop, compared to two or three different types of eye drop if they don’t have SLT. If the effect of the SLT wears off, it can be repeated. It’s very important to remember that whether you receive SLT or use eye drops, you will need regular monitoring for your glaucoma.

What about someone who has had POAG or OHT for a while?

Your treatment options are unlikely to change. So you may already be on eye drops and stay on eye drops, or you may be offered SLT. The recent changes to the NICE guidelines do not affect people who are already receiving treatment for glaucoma or OHT.

What about treatment options for other types of glaucoma, such as ACG? Are they changing?

At the moment, a lot of glaucoma care is focused on eye drops. Are hospitals ready for these changes?

That varies from place to place. In some areas, SLT has been part of the treatment pathway for many years, but this new guideline means more people will receive SLT. In other areas, SLT is not widely available and so the updated guidelines will result in quite a shift, and it may take some time before the change is felt. The hospitals will need to get the equipment and staffing in place to be able to offer SLT to all people who are newly diagnosed with POAG or POHT. And that’s not even considering the huge backlogs and issues associated with COVID-19.

Eye drops are still a big part of glaucoma treatments and will remain so for the foreseeable future. If hospitals can’t offer SLT right now, people will be given eye drops while they’re waiting – they won’t be left with no treatment.

If you have any questions about SLT or eye drops, contact our helpline on 01233 64 81 70 or helpline@glaucoma.uk. Although our team can’t tell you which is the right option for you, they can talk you through what the different treatments might mean for you.

The LiGHT trial was made possible thanks to the patients who agreed to take part in the study. If you would like to get involved with research opportunities, visit our ‘Take part in research’ page to find out more.

This article was originally written for Insight magazine.   For many years, eye drops have been the most common treatment for those diagnosed with glaucoma. However, evidence published in the medical journal Lancet in 2019 showed that laser treatment is at least as effective as eye drops in treating the most common types of glaucoma. In […]