Playing a part in the future of glaucoma care 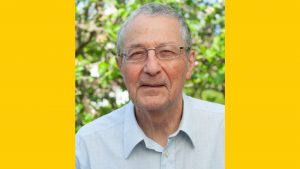 This article was originally written for Insight magazine by John Ross.

When John Ross was diagnosed with glaucoma in 2013, he was given the opportunity of being involved in vital research into glaucoma treatment. Here, he explains why he decided to take part and what his involvement has meant to him.

I was prescribed glasses at the age of six due to being very short-sighted. I wasn’t aware of any other problems with my vision as I grew older but in 2013, aged 64, I went for a routine eye test at the opticians and was found to have high pressures in both eyes. I was referred for further tests and later diagnosed with primary open angle glaucoma (POAG).

I had heard of the disease but knew very little about it. The word ‘glaucoma’ was never mentioned in my family but, looking back, I recall as a small boy sometimes being frightened when being driven by my grandfather. I now realise he was not seeing vehicles or people at the edge of his vision and have no doubt that glaucoma was the source of the problem. He soon stopped driving.

I was naturally concerned when I was told I had glaucoma, but I felt lucky to be referred to Moorfields Eye Hospital for assessment and treatment. From the start, they were very helpful and provided extensive information on the nature of the disease, as well as the different treatment options and the support services available, notably Glaucoma UK. There was a lot to take in, but it was very clear that I was fortunate in being diagnosed at a relatively early point, when there was a good chance of controlling the disease’s progression.

My experience with surgery led me to join Glaucoma UK’s buddy scheme.

As a newly diagnosed patient with POAG, the team at Moorfields invited me to take part in their LiGHT (Laser in Glaucoma and Ocular Hypertension Trial) research programme. The aim of the study was to compare the quality of life of patients who start treatment with eye drops to those who are first treated with laser treatment. Neil Nathwani, the Lead Trial Optometrist on the LiGHT study, explained that my involvement would entail being randomly selected for either laser treatment or the traditional eye drops. I would then have regular check-ups to discuss how my treatment was progressing and also to talk about my lifestyle and how I was coping with everyday activities. It was emphasised that participation in the project would not involve any difference in the level of support or treatment that I would have received in the normal clinic. So, I agreed to be involved.

As part of the LiGHT study, I was randomly selected to receive eye drop treatment. Over the next few years, Neil and Professor Gus Gazzard, who was leading the LiGHT research, were immensely supportive and gave me excellent care, for which I remain extremely grateful. The eye drops did not help to reduce my pressures, so I went on to have a trabeculectomy in my right eye and was later given a selective laser trabeculoplasty (SLT) on my left eye. Unfortunately, this too failed to stop the increase in pressure so I subsequently also had a trabeculectomy on my left eye. Since then, the pressures have largely stabilised, although there is some continuing deterioration in the field of vision in my right eye, which has now also developed a cataract. My experience with surgery led me to join Glaucoma UK’s buddy scheme. Every individual’s situation is unique of course, and one can only offer thoughts on one’s own experience, but I’d like to think I’ve been able to help those I’ve spoken to with their concerns about diagnosis and treatment.

The decision to take part in the LiGHT study was easy.

It took me a little time to appreciate fully the importance of the very detailed questionnaires which followed my every appointment, as part of the LiGHT study. The researchers were especially interested in changing life-style patterns and the way in which either of the treatments might affect these.

The outcomes of the research have now been published and readers of Glaucoma UK’s Spring 2022 edition of Insight magazine will be aware that the National Institute for Health and Care Excellence (NICE) has recommended that SLT should now be regarded as the first line of treatment for certain types of newly diagnosed glaucoma, rather than eye drops.

The decision to take part in the LiGHT study was easy. I was pleased to be involved in potentially valuable research and it was something which my wife, Natalie, was also very keen to support. In her professional life, Natalie was an Educational Psychologist with a specialist role in supporting the education of children with sensory impairment, including visual impairment. She knew a great deal about the impact of visual impairment for both children and adults. So, Natalie had both a personal and a professional interest in my condition. She was very keen to support any research into glaucoma. Whenever possible she accompanied me to appointments, both to support me and to extend her own knowledge of the disease. Not least, she would always ask the questions which had not necessarily occurred to me. She also kept a meticulous record of every appointment, medication and intervention, which helped us to make informed decisions in the light of all the tests, assessments and discussions which were the basis of my treatment.

I sadly lost Natalie to pancreatic cancer in February 2022. Since her death, Neil has told me that he always saw us as a ‘team’, and not simply me as a single patient.

I remain enormously grateful to everyone involved in the LiGHT project and for the opportunity to have been a part of it. I know that participation in the research did not mean there was any difference in the care and professionalism I would have received in the usual clinic. But there was a belief that I could be playing a very minor role in advancing the knowledge and future treatment of those newly diagnosed with glaucoma.

That, and knowing that Natalie was so keen to promote the research, was sufficient reason to want to be involved. If others are offered similar opportunities to play a part in such work, I would very much encourage them to do so.

This article was originally written for Insight magazine by John Ross. When John Ross was diagnosed with glaucoma in 2013, he was given the opportunity of being involved in vital research into glaucoma treatment. Here, he explains why he decided to take part and what his involvement has meant to him. I was prescribed glasses […]