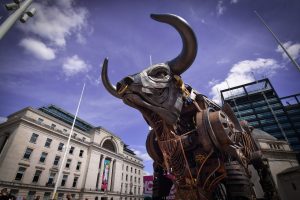 This article was originally published by British Blind Sport

Birmingham delivered the biggest integrated parasports programme of any Commonwealth Games, and there were some truly outstanding performances. Britain had a total haul of 273 medals across all four home nations, with 18 going to blind and partially sighted athletes. Some of Birmingham’s best medal-winning moments included:

Neil Fachie and pilot Lewis Stewart won Scotland’s first gold medal of the Games with a phenomenal cycle in the men’s tandem B kilo. They clocked 59.938 in the final ride of the competition, edging out Team Wales James Ball and pilot Matt Rotherham by just over a tenth of a second. Steve Bate and pilot Chris Latham took bronze for Team England with a time of 1:02.276.

Team England’s Sophie Unwin and pilot Georgia Holt stormed to a silver medal with a time of 1:07.554. Scotland’s Aileen McGlynn took to the track after them, finishing in 1:07.578 with pilot Ellie Stone, to take the bronze medal.

James Ball and pilot Matt Rotherham won Team Wales first gold of the Games. They fought off five-time Commonwealth Games gold medallist Neil Fachie and pilot Lewis Stewart to get to the top of the podium.

An impressive swim from Scotland’s Stephen Clegg saw him claim silver in the S13 50m freestyle, narrowly missing out on gold by 0.01 seconds. He also lowered his own S12 British record.

Team England’s Hannah Russell won a silver medal in the woman’s S13 50m freestyle. She swam a time of 27.67, just over a second behind Australia’s Katja Dedekind, who won gold.

England’s Dave Ellis and guide Luke Pollard secured the first-ever Commonwealth Games gold in the men’s para PTVI triathlon. The pair powered through the course with an unbelievable run time of 16:38, making for an overall time of 57:39.

Team England’s Katie Crowhurst and her guide Jessica Fullager won gold in the first-ever women’s para PTVI triathlon with a time of 1:10:32. The 18-year-old only took up triathlon 12 months ago. They passed Canada’s Jessica Tuomela on the third of four bike loops to take the lead.

England’s Zac Shaw came second in a tight finish for the men’s T11/12 100m final. He ran another excellent time that was only 0.01 outside his personal best. Zac got off to a strong start and was tied with South Africa’s Ndodomzi Ntutu for over half the race, but his rival pushed on in the final few strides to win gold.

You can watch or re-watch all the action on BBC iPlayer. To find out more about the highlights, results and medal tally from the Commonwealth Games, visit the official competition website.

If you’d like to get involved with blind or partially sighted sport in your area, you can find information about individual sports here.

To continue to raise the profile of sport for disabled people in and around the city of Birmingham, British Blind Sport, UK Deaf Sport and Sport Birmingham will host an exciting Parasports Festival on Friday 19 August at Nechells Wellbeing Centre in Birmingham. The free event will allow young people with a disability aged 10-20 and their families to try a variety of sports featured at the Commonwealth Games and help them feel a part of the Birmingham 2022 legacy. For more information or to register, go to the British Blind Sport website.

You can also use their Activity Finder to search for inclusive activities in your area.

This article was originally published by British Blind Sport Birmingham delivered the biggest integrated parasports programme of any Commonwealth Games, and there were some truly outstanding performances. Britain had a total haul of 273 medals across all four home nations, with 18 going to blind and partially sighted athletes. Some of Birmingham’s best medal-winning moments […]