Michael Ellwood, a talent artist, was diagnosed with glaucoma aged 44. Like so many others, his hectic lifestyle meant he put off having his eyes tested for many years. He is sharing his story to show it is never too early to maintain the health of your eyes. 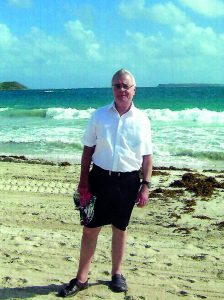 I haven’t overcome glaucoma yet, but nor has it overcome me – nor will it. My one great hope is that through scientific research someone will find a lasting cure for this malignant condition.

My name is Michael. I have advanced open angle chronic glaucoma in both eyes. I was diagnosed with the condition in 1997 at the age of 44. I was a young professional man with a family and a hectic lifestyle that did not – or would not – conceive the possibility of eye failure, and like many I put off having my eyes tested for many years.

Eventually though, I hesitantly decided to bite the bullet and have an eye examination. If only I had done so a few years earlier I would not be writing these words now. I thought it could never happen to me, but it did happen to me, as it can to anyone in life.

I drove myself to the optician and thought I could see perfectly, so when the optician informed me I had glaucoma my initial thought was, “Ok, but what is glaucoma?” I thought perhaps it was something I’d always had that had never been spotted before and it would not kill me.

This short self-reassurance lasted only as long as the optician took to write a letter to my doctor; he put it in my hand and told me to see my doctor who would refer me to hospital.

At the hospital the next day I was informed that I had advanced glaucoma and had lost a great deal of sight – sight which would never return. The hospital advised me to inform the DVLA as it was likely that I would have to surrender my driving licence. The next day, at work, I was informed that I would not be permitted to drive on company business and would temporarily be given a desk job.

All this happened within the space of only two days, during which the multiple feelings of bewilderment, anxiety, astonishment and denial of the diagnosis fought each other within me for supremacy.

Glaucoma is the silent whisperer of death to good eyesight. It’s silent in that it creeps ever so slowly up on you. Don’t be fooled by thinking you can see perfectly. Can you really? Challenge that thought and please get tested.

For me, lack of vision means never taking anything for granted. Alertness is now my watchword and greater concentration brings the reward of safety. Crowded spaces can be challenging, even alarming, to visually impaired people: crowds rushing by, people knocking into you, loud voices heard but not seen, all may bring unease and anxiety.

The loss of sight never really affects just the individual. If there is a family network in the background, close relatives have to monitor their own sight for signs of glaucoma, and a greater dependence and strain is put on the family when one member becomes visually impaired.

I have only about 7% total sight left now, and I get checked at Addenbrookes Hospital every eight weeks.

I haven’t overcome glaucoma yet, but nor has it overcome me – nor will it. My one great hope is that through scientific research someone will find a lasting cure for this malignant condition.

The trials and tribulations of my blindness over many years has only been offset by good humour, love, hope and a desire to accomplish as much as I am able to within the bounds of my disability.

In truth I might have avoided these trials and tribulations, falls, knocks, anxiety and so on. All I needed was to have had, at the right time, a short, painless eye examination.

It is never too early to maintain the health of your eyes.